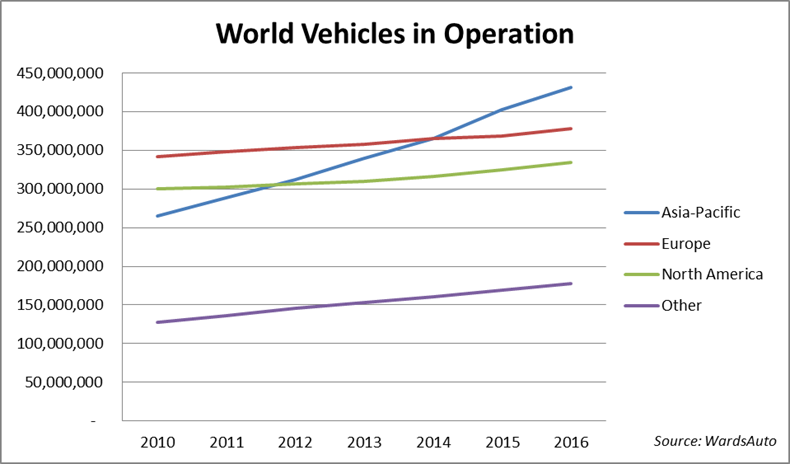 The world vehicle population increased an estimated 4.6% in 2016 from the previous year, with much of the growth coming from soaring demand in China.

The global vehicle population stood at 1.32 billion cars and trucks at the end of 2016, nearly double the volume 20 years prior when vehicles-in-operation totaled 670 million in 1996. Coincidently, the fleet grew at about the same pace in the 20 years through 1996 by roughly doubling 1976’s 342 million.

On the other end of the spectrum are developing nations such as India, where there were 28.8 persons for every vehicle in 2016. With 46 million VIOs, India has about the same as Germany, though it is home to 16 times as many people. However, India’s VIO has grown at a robust 10-year average of 11%, whereas Germany’s 10-year average was 1.2%. Other countries with double-digit persons-per-vehicle ratios in 2016 include Indonesia (11.6), Pakistan (58.9) and Philippines (26.6).

Potential expansion of the middle class could be a boon to future vehicle demand in developing nations, though already-congested cities with narrow streets is a limiting factor for the auto industry. VIO figures do not count motorbikes, which are the most common mode of transportation in emergent countries. In Vietnam, for example, there were 45 million registered motorbikes in 2016, and just 500,000 four-wheel vehicles.

Although still a distant second to the U.S., China’s VIO jumped 12.8% in 2016 to 194 million cars and trucks. Still, the growth in China is staggering: it added 100 million vehicles to its roads in six years and sold more new vehicles just last year (28 million) than were registered there in 2004. And there is a lot of room for growth with 7.1 persons per vehicle. However, the government has set strict emissions standards and has ordered the removal of millions of older vehicles each year to reduce pollution. But the upside is Chinese consumers who want a car are basically forced to buy new, and there are close to 500 models available across a huge price range to choose from.

Japan had the third-highest vehicle population (it was surpassed by China in 2010) with 76 million, inching up 0.4% from 2015. The already-low 1.7 persons-per-vehicle ratio, coupled with an aging population and low fertility rate, may continue to impede auto industry growth regardless of an economic upturn.

In Europe, Russia holds the title for largest vehicle volume with 52 million, a 5.7% increase from 2015 despite a 9.5% slowdown in new-vehicle sales. The 2.8 persons-per-vehicle rate was about average for Eastern Europe, while in Western Europe the average was 1.6. There were 49 million vehicles on the road in Germany, 43 million in Italy and 39 million in both France and the U.K.

Rounding out the major regions, South America has a relatively small vehicle population. Brazil held the biggest volume by far, with a VIO of 43 million, or 4.9 persons per vehicle. The total was flat (+0.8%) from 2015, after growing an average 6.1% the previous 10 years. Chile had 5 million registered vehicles, soaring 15.4% above prior year and 3.7 persons per vehicle.